Sharon Dietrich is the definition of a hard worker. Raised in the moving and storage industry, Sharon has known moving her entire life. 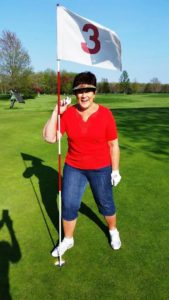 ownership from their kitchen table. They booked moves with a pencil and pad of paper.

By the time Sharon became a teenager, the business had established a warehouse and office. One day, a young man vandalized one of the trucks, throwing a rock and busting a windshield. Sharon’s father made the young man, Gene Dietrich, work until he paid off the cost of the broken glass. Little did Lawrence know that Gene and Sharon would become quite the pair, settle down, get married and have a few children.

According to Sharon’s daughter Annie Dietrich, Sharon has worked in the office doing anything and everything throughout the decades.

“I think my mom would say that the best part of being a business owner is that through all the ups and downs, she’s been able to navigate whatever came their way with her true life partner, my dad, Gene Dietrich,” said Annie.

Sharon and Gene have endured everything over the years – good times, bad times, hard economic times and more.

Some of the good times for Sharon include receiving the 1999 Ohio Movers Hall of Fame Award, alongside Gene.

“It was the first time ever given to a couple instead of just one person,” Annie said.

Sharon pours her heart and soul into her business, family and community. She loves her family endlessly and will go the extra mile for any customer, employee or agent in the network.  Sharon’s parents worked hard, and she learned from the best, teaching her kids the same.

“I think she would probably say that seeing her kids grow up and now run the businesses is a very proud moment as a parent,” said Annie.

The Wheaton Group is proud to have Sharon and all the Dietrich family members as part of our network family.

Find an Arpin Mover in your area.

I was very impressed with the workmanship from Arpin Van Lines. They were wonderful! They were on time and came with good attitudes. They took really good care with loading our things. I'd recommend them.

Search for an Arpin Mover in your area.